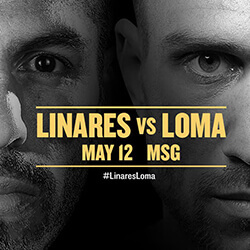 Set for early May, WBO reining junior lightweight champion Vasyl Lomachenko is pitted against for a showdown against WBA lightweight champion Jorge Linares. Many believe that this will be one of the best matches of the year. The fight be held in Madison Square Garden in New York City.

Lomachenko is regarded by many as the best pound-for-pound boxers in the world. He’s a two-time Olympic gold medallist, and became a world champion in his third professional match. He’s made the last of his four opponents either quit outright, or be forced to get their cornermen to put an end to the fight. He has earned praise for his technical skill, his volume, his footwork, and the timing of his punches. He’s not as powerful a puncher as some of the others he’s faced, but he’s very capable of achieving knockouts.

His upcoming opponent, Linares, has proven himself to be outstanding fighter, but has struggled to gain support in the United States. Most of his early career matches were held in Japan, and has been promoted by legendary Akihiko Honda. He’s currently been on a 13-match winning streak, and his fight against Lomachenko is arguably his biggest ever. Their fight style is comparable, and many believe it should be an even fight.

This is a big fight for both contenders, and is being broadcast by just about every major network in the world, and is set to be one of the most memorable matches in recent years.