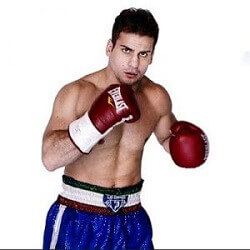 Phil Lo Greco has sent an ominous waning to World Champion Amir Khan, stating that Khan needs to start looking at his options outside the ring in a bid to prove to Khan that his career is coming to an end.

Amir Khan’s two year absence from the match ring has come to an end in anticipation of his fight against Lo Greco, a fight that is to be held in Liverpool and broadcast live by Sky Sports. Kell Brook, a seasoned rival of Khan’s is going to watch the fight from The Echo Arena.

Khan’s last fight two years ago saw an end to the reign of the once world champion, after he was knocked out by Saul Alvares. Lo Greco believes that Khan still bears mental scars from the fight, and intends to make his fight against Khan one that will ensure the veteran never steps foot in a ring ever again.

Lo Greco is reported to have said in a reply as to whether Khan is under pressure, “I think so, of course. Why wouldn’t there be?” “His last fight, he got seriously hurt, he’s been out for two years. I know mentally he’s not stable. Physically he’s god-gifted, but at this stage once you pass your 30s and you’re not mentally right up here, it doesn’t matter how gifted you are physically – this isn’t going to work out.”

He continued by saying, “He’s run out of lives and I think he knows that, but athletes they have a tendency to lie to themselves, thinking, ‘I’ve got one more.’” He finishes by remarking, “This is my time, absolutely.”