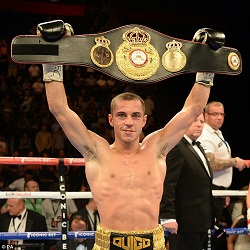 Quigg Bracing for All Out War With Valdez

When WBO featherweight titlist Oscar Valdez steps into the ring on the 11th of March he’s going to be prepared to face the hardest battle of his life. Valdez will be facing of against Scott Quigg, and Quigg believes that the 2 boxers are made for one another.

Quigg has said that he thinks fans are in for a real treat and that the styles jell so well, a good match is a foregone conclusion. Quigg is hoping for a fan-friendly duel battle and has said that he thinks it going o be ‘a cracker’. He also added that unlike when he lost to Carl Frampton, he won’t be holding back n the first few rounds, and is ready to go all in, early on.

Fans can expect fireworks form the two boxers and it sounds like Quigg is ready to push Valdez to his limits, something that has been happening a lot in recent bouts. In April last year Valdez went 12 rounds with Genesis Servania before claiming victory, and he fought tooth and nail to take the title. Saturday’s fight looks set to be a good, and potentially long one if we look at past results, and the world championship fight will be broadcast live along with the De Leon vs. Vences fight.