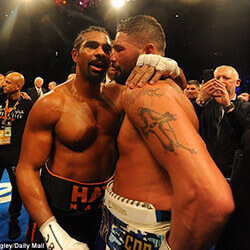 Tony Bellew made news when he sank his teeth into his current opponent, David Haye, telling reporters that he believes Haye is a, “wounded and desperate animal” at a recent press conference.

The press conference saw fans cheering Bellew and booing Haye as their long-anticipated rematch is due to start. Haye further added to his statement to reporters, “A wounded and desperate animal is very dangerous and we know what we are in with.”

He went on to say, “Don’t detract anything from what he is, a brilliant fighter with a great, illustrious career, I wish I had lifted all the belts he has. Ultimately, what matters is on Saturday, styles make fights and you will see, he will lose again.

“David refuses to mention the injury, I give hum an immense amount of credit for his bravery and carrying on but that fight was only going one way, he knew.”

Their last fight ended in disaster for Haye, and his team had to eventually throw in the towel in the 11th round. The fight also ended in an injury to Haye, of which he’s been recovering from over the last few months in preparation for their rematch.

Despite the verbal abuse at the press conference, Haye managed to keep his cool, saying, “I was on my best behaviour once again. Last time out with the abuse from the crowd, I went back at them to match them and it all went pear-shaped and went terribly. I turned the other cheek this time, I am going to do my talking in the ring.”

Phil Lo Greco has sent an ominous waning to World Champion Amir Khan, stating that Khan needs to start looking at his options outside the ring in a bid to ….

In an amusing publicity stunt, Sean Dodd and Tommy Coyle arrived at a press conference dressed as Batman and Superman. The dress up was clearly referencing the popular showdowns between ….