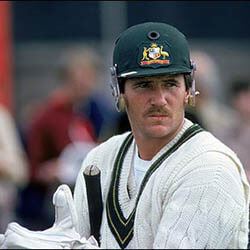 Allan Robert Border, Australian Cricket commentator and former international player, has said that it’s impossible to imagine our hosting a Twenty20 World Cup without spectators later on in 2020. It remains the only Major Men’s Cricket Tournament that we haven’t won yet and was scheduled to run from October 18 to November 15, dates put in serious doubt thanks to the novel coronavirus COVID-19 pandemic.

Whether or not the 16-team event will go ahead is up for debate and organisers have already begun investigating possible contingency plans. Restrictions on travel and necessary quarantine periods post an insurmountable challenge if they’re still in place in October as is becoming expected.

But Border has said that he can’t even imagine what playing to an empty stadium would be like, saying it’s a possibility that defies belief. He said having players, support staff, and various other game associates wandering around Australia playing Cricket but no one being allowed in to watch games is a ridiculous concept.

Border says that either it gets played and everyone involved does whatever they’re being paid to do and we’re past the pandemic or it gets cancelled and rescheduled to take place at a later date.

Glenn Maxwell expressed similar sentiments recently, saying that, if you look at how the World Cup has been set up, playing in front of crowds is less likely to be possible. And without spectators, what’s the point? Maxwell can’t see it happening in the near future.