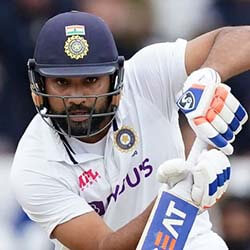 Sharma will lead India in all three formats following Kohli’s step-down as Test captain of the cricket-dominating country. Kohli, in a move that shocked the sporting world, announced his resignation in January after seven years in charge of India’s national side. He is India’s most celebrated Test captain to date.

The BCCI announced the name of Kohli’s successor on Saturday.

According to selection committee chairman Chetan Sharma via a virtual news conference on the weekend, Rohit Sharma is currently the number one player in the country. He said the general consensus was that under a player with Sharma’s drive and experience, India will be well placed to also develop and groom future leaders of the national side.

India are currently involved in a series of three T20 Internationals, and will be moving on to a two-Test series in March. Both squads will see pace-bowler Jasprit Bumrah in the role of deputy to Sharma. The opening Test in Mohali is Kohli’s 100th match.

Both Cheteshwar Pujara and Ajinkya Rahane have in the meantime been dropped from the team. Sharma, however, said that the reasoning behind this was to give the two veteran batsman the opportunity to “rediscover” their form in domestic cricket.

Sharma also said that the pair had been informed that the door will remain open for them.

Kohli and Rishabh pant will be sitting out of Sunday’s Twenty20 game against the West Indies in order to rest.