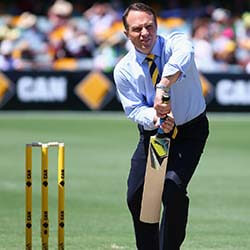 Former Australian opening batsman Michael Slater will reportedly plead guilty to charges of domestic violence in the event his bid to have those charges dealt with on mental health grounds were to fail. Slater has also been charged with the violation of an AVO (Apprehended Violence Order).

The former cricketing great will spend Christmas in a mental health unit of Sydney’s Northern Beaches Hospital. Slater was charged with breaching the AVO after sending several offensive text messages to his ex-partner. Said AVO was issued against Slater in October, during which time he was charged with intimidation and stalking.

The breach of the AVO on Dec. 14 had apparently been alcohol-fuelled, and ultimately resulted in Slater committing to spend three weeks hospitalised in a mental health facility. Slater was previously due to appear in a Waverley Local Court in order to bring an application to have the intimidation and stalking charges dismissed on grounds of mental health.

Appearing on Slater’s behalf at court had been lawyer James McLoughlin, who reportedly informed the court how he had seen his client in the mental health unit of the hospital only the day before. McLoughlin reportedly at the time requested that the applications be heard under the provisions of the Mental Health Act, and in 2022.

While McLoughlin stopped short of entering a plea on behalf of his client, he confirmed that Slater would be entering pleas of guilty in the event of his mental health applications being unsuccessful.