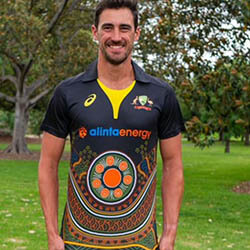 Aaron Finch and his men will this summer for the first time in the history of Aussie cricket pay tribute to the country’s First Nations residents. The team will play the upcoming Twenty20 series against India in a jersey inspired by Australia’s Indigenous people.

The jersey, which features a large imprint of the “Walkabout Wickets” emblem – representative of all Aboriginal cricketers – celebrates one of the country’s most remarkable cricket stories; which is of course the 1868 tour of the UK by that year’s Aboriginal cricket team. Specially significant too is the fact that one of the designers of the special tribute jersey, Aunty Fiona, is a direct descendent of one of the members of the 1868 touring national side – the late cricketer “Mosquito” Couzens (known as Gronggarrong).

Though not the first time to see the famous emblem featured on an Australian cricket jersey, the India series will be the first ever tournament to see the men’s team wearing an entirely Indigenous getup. And it’s a prospect Australian fast-bowler Mitchel Starc says he’s very much looking forward to embracing.

Australia’s women’s side could in the past be seen sporting a similar artwork to that about to be featured on the men’s side’s Test jerseys, but this summer will be the men’s side’s first time wearing a completely Indigenous design.

The jersey is the result of a collaboration between Aunty Fiona Clarke and Cricket Australia Indigenous Engagement Specialist Courtney Hagen.

Former Australian skipper Michael Clarke has spoken out against comments made by coach Justin Langer, captain Tim Paine, and prominent player David Warner ahead of Australia’s upcoming series against India. ….

A reportedly highly emotional Shane Watson has apparently called time on his victory-studded professional cricketing career – and across all formats. According to a Indian Premier League news report ran ….

No End To Marlon Samuels’ Bad-Mouthing

Controversial bad-mouthing cricketing batsman Marlon Samuels has made yet another degrading reference to the life partners of England’s national cricket players. And this only days after getting slammed publicly for ….

Aussie coach Justin Langer says he isn’t at all keen on the possibility of two international competitions being played simultaneously by his team early next year – a situation he ….