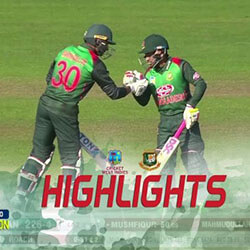 A five-wicket victory from Abu Jayed helped the Bangladesh team take a six-wicket win against the Ireland in Clontarf for the Tri-Nations ODI series match. The hosts claimed 292-8 in total, with Paul Stirling taking 130, while captain William Porterfield earning 94, setting a new Irish record stand of 174 for the third wicket.

Jayed helped keep the runs at a minimum, while Bangladesh quickly racked up 294-4 in just 43 overs, with Liton Das being the top scorer at 76. Bangladesh is set to take on the West Indies for the final match.

Ireland were already out of contention for a chance at the decider after they lost two matches to the West Indies while their first game against Bangladesh was called off due to bad weather. Despite this, the team had hoped to finish the series on a higher note, and it looked like their wish would come true thanks to opener Stirling striking four sixes while Porterfield left much to be desired. Jayed was responsible for both, and also Andrew Balbirnie as the Irish battle to make to their final of 292-8 in the final six overs.

And while it remained a competitive total, Bangladesh, who have won their last three games in the series, had no problem beating Ireland quickly and methodically. Their victory came even faster thanks to a disappointing attack from Ireland, which the guest team were easily able to play through, and sealed the win.