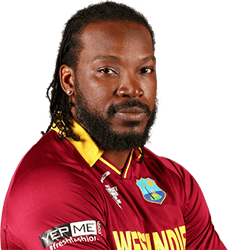 West Indies batsman Chris Gayle has announced that he will be reversing his one-day international retirement, and believes that he may play a Test match for the first time in five years. The 39-year-old opener n February said that he would be retiring from one day international cricket after the end of the World Cu.

The player has scored 10,345 ODI runs, second only to Brian Lara for the West Indies team, along with 25 centuries. Gayle has not taken part in a Test since September of 2014, and was absent fro two years of 50 over cricket before he returned to the international side in 2017.

His 215 against the Zimbabwean team is the fourth highest score for a one day international, and is one among only six men to have scored an ODI double hundred. He has claimed a total of 194 runs in six World Cup matches for the West Indies, and has a top score of 87 against New Zealand.

When announcing his retirement earlier in the year, Gayle stated that he was looking forward to letting the younger players have some fun while he sits back in the party stands. ODI captain Jason Holder said that he did not know of Gayle’s plan until once the news conference had come to an end. Holder stated that if Gayle is dedicated to playing for the West Indies team any longer than it would be a benefit to the team.