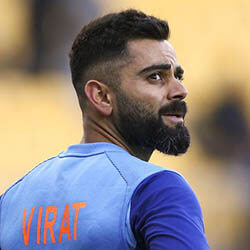 Cricket’s notorious and certainly most famous death stare wasted no time making its first appearance of the summer.

India captain Virat Kohli during Friday’s first ODI against Australia made no secret of his stunned surprise at star fielder Ravindra (Ravi) Jadeja’s failure to run out Aussie skipper Aaron Finch. The chance to do so was practically presented to Jadeja on a silver platter, after all, and the failure made all the worse by the fact that Jadeja is considered one of the greatest fielders in the world.

What would not have inspired any form of calm in the clearly furious Kohli was the obvious look of incredible relief seen on the Australia captain’s face as his eyes traced the ball steering perfectly clear and wide of the stumps.

One of the first to notice had been cricket commentator Brendon Julian. Kohli was a man clearly in disbelief at what had just happened right before his eyes, said Julian, and sporting a look of unbelief that wanted to know of the fielder what exactly it is that he was doing by missing such an easy thump.

Insult added to injury was that Finch was on 51 at the time – and would eventually go on to hit a century.

Shane Warne probably said it best in his description of Jadeja’s super fail on Friday morning. Said Warne on Fox Cricket, what the fielder had done was to instead of “just standing there”, started to run frantically back and forth trying to make a judgement call as to where the ball was most likely to and.

He just had to stand there, repeated Warne. And then he ends up not even getting a hand on it at all.