De Kock Says Why He Refused To Take The Knee 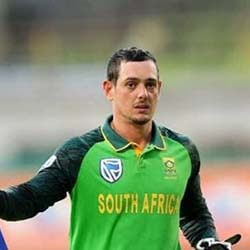 South African T20 star Quinton de Kock has now apologised to his teammates and country for refusing to bend the knee ahead of SA’s recent standoff against the West Indies.

In a statement issued on Thursday morning, de Kock said he had never meant to hurt or offend anybody with his actions, and that despite what his refusal to bend the knee might have looked like from the outside, it had nothing at all to do with race or racism.

The cricketer shed some light on the events leading up to the unsavoury drama by saying he himself hails from a mixed-race family and that he felt as if his rights were being taken away by the way in which the order had been handed down by Cricket South Africa. He said nothing would have been easier to do than bending the knee, regardless of whether he was a racist or not. To him, he said it had been a matter of integrity and principle.

He did however agree to bend the knee in solidarity with the rest of his team for future events. He said if taking a knee would somehow help to educate and better the quality of life of anybody else, then he would be more than happy to do exactly that.

De Kock said the entire affair had caused immense pain for his family, and especially for his wife, who is pregnant. He said being labeled a racist had deeply hurt him and his loved ones.