England’s Captain Banned From Next ODI 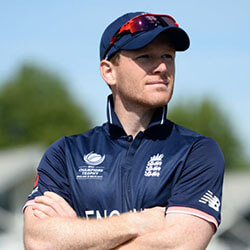 British captain Eoin Morgan has been banned from the next one day international, and has been given a fine of 40% of his match fee due to slow over rate during their latest match against Pakistan, of which they won by six wickets.

It’s marked as the second offence for the English captain within the last two months after the team was called out for it’s slow over rate while playing against the West Indies in February. Morgan is set to miss their upcoming ODI match against Pakistan that’s set to be played at Trent Bridge.

England currently lead 2-0 for the five match series. Talking about their ban of Morgan, the international Cricket Council announced in a statement that England were ruled to be two overs short after their time allowances had been taken into considering. The team had taken almost four hours in total to bowl their 40 overs while in Bristol.

Along with Morgan, Jonny Bairstow has also been disciplined by the ICC, who was recently reprimanded after hitting the stumps with his bat when he was dismissed during the 29th over. The player struck a brilliant century as the team chased the 259 to win during their match at County Ground in Bristol.

The rest of the team have also received fines, which have been set to 20% of their match fees for the slow over rate, which they will all need to cover before their next outing.