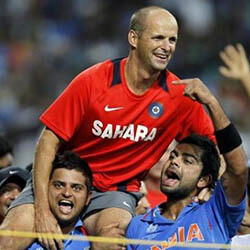 Gary Kirsten has taken over the position of coach of Durban Heat, ruling him out of becoming the next coach for England.

The 51 year old, who is a former South Africa and India coach, was seen as a candidate to replace Trevor Bayliss after he leaves the role later this year in September. Kirsten will be taking over at the South African Twenty20 franchise in November of this year. Mickey Arthur, who is currently being considered for role of coach for England, recently left his position as Pakistan coach after his contract had not been extended or renewed.

England director of cricket Ashley Giles stated that he had informally sounded out candidates with the intention being for Bayliss’ successor to preside over all three formats.

Chris Silverwood, Paul Collingwood and Graham Thorpe, England’s current assistant coaches could possibly be considered in the future.  Kirsten, who had played 101 Tests for the South African side, won the World Cup as coach of India in 2011. along with taking South Africa to the top of the International Cricket Council Test rankings in 2012.

Bayliss, who is set to be leaving the team after the Ashes ends on 16 September, will be coaching Sunrisers Hyderabad for the upcoming 2020 Indian Premier League.

Australia and the West Indies have officially postponed the upcoming T20 series originally scheduled to be played in Queensland in October over the possible health risks associated with continuing with ….

Langer Says Aus Must Do England In September

If the health of world cricket is going to be maintained, then Australia must tour England in September. This according to Australia head coach Justin Langer, on the topic of ….