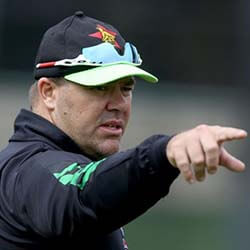 A lengthy eight-year ban is what now awaits former Zimbabwean cricketer and captain Heath Streak – a man once regarded as one of the country’s best cricketers who ever played for the national side. The former pace-bowler was the first player from his country’s national side to take 100 Test wickets.  He coached the national side from 2009-2013, and then again from 2016-2018.

The ICC ban came after cricket’s anti-corruption watch found Streak guilty of breaching the sport’s integrity code while coaching his country’s national team and acting as assistant coach in the Indian Premier League. He pled guilty to having been in regular communication for over a year with a man known to have been digging deep for inside info for the purpose of betting on the game.

The 47-year-old has now admitted to a total of 5 charges – the disclosing of information that might have been used for gambling, a failure to disclose gifts received, the facilitation of introducing the unnamed Indian man to several of Zimbabwe’s national players, the obstruction of an ICC investigation, and failing to report the corruption to the ICC.

The illegal communication between Streak and the Indian national began via WhatsApp in 2017 and would go on to last a total of 15 months. During this time, Streak had provided the unnamed man with large volumes of information. In return for his information, the man paid Streak in high-value gifts – including a couple of Bitcoins and a new iPhone.