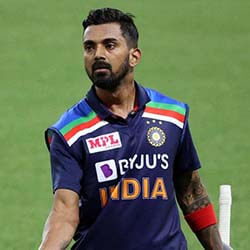 Star India Opener KL Rahul on Sunday got fined a stunning 15 per cent of his match fee for showing his unhappiness with an umpire’s decision over his having been caught behind during Day 3 of the visitors’ fourth Test against England.

The unsavoury incident took place during the 34th over of India’s second innings against England on Saturday, only moments after Rahul got caught off by umpires off James Anderson. According to the ICC’s Code of Conduct, Rahul’s actions were in breach of Article 2.8, which relates to the showing of “dissent” towards an umpire during an international match.

A media release by the ICC confirmed the incident and fine on Sunday, adding also that a single demerit point had been added to Rahul’s disciplinary record as a player. For Rahul, Saturday’s offence was the first of its kind over a two-year period.

Since Rahul readily accepted the fine and punishment as imposed by ICC Elite Panel of Match Referees member Chris Broad, there has been no further need for a formal hearing to the held with the involved parties. The charge was officially leveled by on-field umpires Alex Wharf, Michael Gough, and Richard Illingworth, as well as by fourth match official Mike Burns.

The number of demerit points accrued by a player over a 24-month period determines whether suspension points and even a ban are ultimately imposed. Such points remain on a player’s record for a two-year period, after which they are permanently purged.

Cricket Australia this week announced its decision to pull the plug on the country’s Test match previously planned for hosting Afghanistan in November. The organisation said the decision was taken ….

Several senior ECB board members are set to share in an estimated £2.1 million in incentive bonus money sometime next year – this despite recent job cuts made in response ….

Former Australia skipper and cricketer George Bailey has been appointed as Cricket Australia’s new chairman of its national selection panel. The 38-year-old Bailey replaces Trevor Hohns, who recently announced his ….

Australia on Monday denied the West Indies their hopes of finally ending a 26-year-long ODI series drought when they beat their opponents 2-1 with a six-wicket win convincingly scored during ….