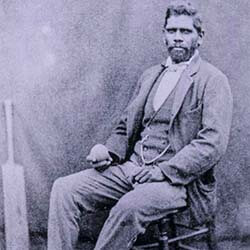 Johnny Mullagh was one of the foremost Victorian cricketers. He led the famous, first-ever tour of England in 1868 and had a marvellous reputation. The right-arm bowler and right-handed batsman was a skilful all-rounder and has finally been inducted into the Australian Cricket Hall of Fame. He took 245 wickets at a 10.00 average and scored 1 698 runs at 23.65. This was over the course of the 45 matches that made up the 47-match tour.

Peter King, Chairman of the Australian Cricket Hall of Fame, explained that the selection panel had seen fit to modify its criteria so as to allow Mullagh to be inducted despite never officially representing his country in Test games. King said that this exception was made to honour the impact that indigenous players have had on the sport and stood testament to righting an awful oversight.

King said that Mullagh is the ideal representative of the Victorian era and was chosen as such instead of individualising each possible inductee retrospectively. He added that, following this, the criteria will revert back to its standard rules.

Mullagh was part of the third-ever game held at the Melbourne Cricket Ground on Boxing Day in 1866. He was part of the Aboriginal and T. W. Wills XI team against the city’s Cricket Club. His hard work has served to bring the Mullagh Medal into existence. Begun in 2020, it’s first recipient was Ajinkya Rahane, the middle order batsman for India. He made 139 runs, including a century, and clocked a high score of 112.