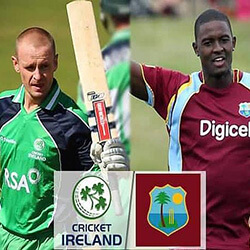 A new record opener ODI partnership between John Campbell and Shai Hope saw the two earn 365 to help their team claim a 196 run victory over Ireland in their game played in Clontarf. Campbell, who took 179, and Hope, 170, missed the record ODI stand by five runs, which was originally set by Windies duo Chris Gayle and Marlon Samuels in 2015.

The assault from Ireland was completely routed thanks to Campbell and Hope, who hit eight sixes and 37 fours to give the West Indies a total of 381-3. Ireland were out by 185 in 34 overs, with Kevin O’Brien the top-scorer with 68. The hosts gave the English team a scare for their last game, but their bowlers pushed through in Dublin two days after Irish William Porterfield had decided to put the visitors into a batting position.

The choice was a mistake at first, but Campbell managed to escape a run out attempt with during the first play of the match. Records kept being beaten as the openers put everything they had against Ireland, with even Tim Murtage being on the receiving end, finishing the game with figures of 0-71 from 10 overs. It was the first time that both openers for the West Indies made centuries for the first game, and when it 306, it became the largest first wicket partnership in the history of the ODI. Their reign continued through Samuels and Gayle’s record when Campbell was caught on the boundary.

The Australian sports community is rallying around Moises Henriques. This is after the Captain of the Sydney Sixers shared an emotional update about the status of his mental health woes. ….