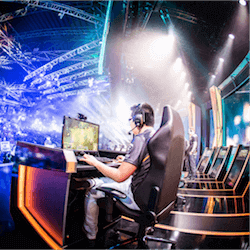 Formula 1 – keen not to be left behind by the modern world of digital media – has officially joined the eSport revolution.  The first official F1 eSport series will be running in conjunction with the actual Formula 1 World Championship, with the inaugural season set to run from September until the season finale at Abu Dhabi.  The medium will be a new F1 video game – developed and released by Codemasters and will cater to the racing needs of PS4, Xbox One and ordinary PC users.

A qualification period will be held during the month of September – and from there the 40 fastest drivers will graduate in order to attend the semi-finals in London in October.  The top 20 drivers will then move on towards the finals which will consist of a trio of races to be battled out at Abu Dhabi in November.

The move is not only a bid to join the lucrative world of eSport, but also an attempt to reach an altogether different age bracket.  Individuals as young as 13 years of age follow the action in the world of eSport – creating an interest in a specific sporting event at a very mouldable age.  Sean Bratches, the Formula 1 Group’s commercial managing director, could not agree more, saying that F1’s involvement in eSport would serve to promote the organisation’s attempts to connect with a new audience and a younger generation than the one traditionally following F1 action at the moment.

Best of all: its good, clean fun.

A New Breed Of Spectators

eSport enjoys immense popularity and increasing fan engagement – fans who had been exclusively interested in the actual sport on the field or track up until now.  The promotion of social media interaction between fans and their sporting hero’s have certainly made for a kick-start to the digital affair.

F1 is set to benefit from the eSport Arena going forward.

Just as with traditional sports, fans have the opportunity to follow and support their favourite teams, watch games and matches and even physically attend digital arena’s where final matches are broadcast on larger than life closed circuit televisions.

Football clubs such as Manchester City have already started signing virtual FIFA stars instead of only those who prefer to battle it out on the field.  The reasoning behind this type of action is quite simple, and very sensible – eSport is where the next generation of fans will be coming from.  Not getting in line is simply no longer an option.