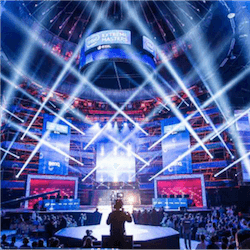 As eSports grow in popularity around the world and increasing numbers of online sports betting fans discover the betting options they offer, Australian eSports punters are going to run into a problem already familiar to conventional sports fans: fixture overload.

In the weekend starting on 3 November, for example, apart from league action in Germany for the 2017 ESL Winter Championship, there are two major tournaments reaching their final stages in China and the USA.

Friday, 3 November sees the start of the Grand Finals playoffs of the Heroes of the Storm 2017 World Championship in at the Anaheim Convention Center in California. Quarter-finals are scheduled for Friday, with the semis and finals on Saturday.

Eight teams from around the globe are through to the HotS playoffs, with Swedish/UK outfit Fnatic and South Korea’s MVP Black looking like the two teams worth backing to go all the way. Competition is likely to be strongest from another South Korean team, Ballistix, and British contenders Dignitas.

The other four teams in the playoffs are the USA’s Team Freedom, Germany’s Team expert, North American outfit Roll20 esports, and Tempo Storm, also from the USA. None of them is expected to make the finals, according to the betting sites.

Saturday brings the 2017 League of Legends World Championship Final at the Bird’s Nest stadium in Beijing, China. South Korean team SK Telecom T1 has had a tough road to the Final, scraping through two series narrowly and almost falling to Europe’s Misfit Gaming in the quarter-finals.

They’ll be facing their countrymen in the Samsung Galaxy Pro-Game team, who have looked much more convincing throughout the earlier rounds, in a best-of-five final for the 2017 World Champions’ trophy. The winner will also take 37.5% of the prize pool, which will be at least $2.25-million, and the runner-up gets 13.5%. SKT are the favourites, at around $1.50 at online betting sites, with Galaxy offered at $2.50.