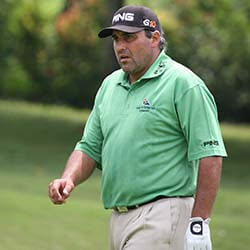 Argentinian US Open and Masters winner Angel Cabrera has reportedly been arrested by police and is about to be extradited back to the country of his birth in order to stand trial for crimes allegedly committed in 2016. The 51-year-old was registered on Interpol’s red-code list and was arrested in a well-to-do area of Rio de Janeiro, Brazil.

Cabrera’s arrest was mandated by the highest court in Brazil, and though the pro-golfer has not been officially named as the individual arrested and set for extradition, he has been identified as such by a report ran by the Associated Press. Cabrera faces several charges, including theft, illegal intimidation, assault, and a disregard for local law enforcement authorities.

According to local media reporters in Argentina, Cabrera’s ex-wife, Silvia Rivadero, is behind the filing of two of the charges. He also faces charges filed by ex-partner Cecilia Torres, who alleges to have been punched and threatened by Cabrera, as well as nearly run over by him in his car.

Cabrera last made the cut for the Masters in 2016, during which year he finished tied for 24th. He won the Masters in a nail-biting playoff in 2009, and in 2013 lost that year’s playoff to Adam Scott. He’s also a US Open champion, having beaten Tiger Woods and Jim Furyk to the post at Oakmont back in 2007.

Cabrera also counts a separate single PGA Tour event as well as four wins on the European Tour among his achievements – including Wentworth’s BMW PGA Championship.

Aussie golfer Matt Jones on Sunday walked away not only with a phenomenal $1.63 million in winner’s prize money after a five-shot victory in the PGA’s Honda Classic in Florida, ….