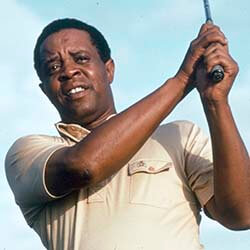 The legendary Lee Elder, who smashed the colour barrier at golf’s Masters by becoming the first Black player to compete at Augusta, has died. He was 87.

His Augusta appearance in 1975 is regarded by many to have been the most poignant moment of his career. The tournament had up to that point in time been regarded as the very embodiment of racism and discrimination based on colour.

In 2015, Elder revealed to a prominent newsroom how playing in the 1975 Augusta Masters had been an intimidating affair. He said this was largely owing to the death threats he had received during the run-up to the tournament. One such threat had apparently cautioned him to check behind the trees when competing rounds at the event.

Elder said the threats had eventually led to the need to rent two houses for the duration of the tournament. He said he had not wanted anybody to know precisely where he’d be staying during that time.

But the African American legend had faced several racially driven problems in the 1960s and 70s. He previously revealed how he had on one occasion been forced to change clothes in the parking lot after he was barred from entering the clubhouse.

It all started out for Elder during his time working as a caddie. He would later refine his skills as a player during his service in the army. Upon his return back home, he joined the United Golf Association, a tour exclusively for Black golfers.

During his career, he had won four tournaments on the PGA Tour.