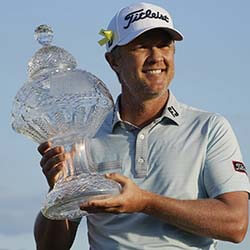 Aussie golfer Matt Jones on Sunday walked away not only with a phenomenal $1.63 million in winner’s prize money after a five-shot victory in the PGA’s Honda Classic in Florida, but also nabbed a late starting entry to this year’s Masters.

The Australian, who is a two-time Australian Open champion and also the current title-holder of the Stonehaven Cup, pulled off the impressive feat by converting a three-shot lead during the third round of the tournament into his second title win on golf’s grandest tour. Jones’ performance also saw him climb the FedExCup standings from 60th to an impressive 11th place.

The Australian appeared emotional and choked-up after completing Sunday’s win, the biggest of his career to date, saying how it has been seven years since he completed his maiden win on the famous PGA Tour. Jones said that during the years in between then and now, he had known tough and difficult times, but had continued to work hard at improving with the help of coach Gary Barter.

Jones’ win on Sunday means at least one Australian has won an event on the PGA Tour for an uninterrupted 33 years, which is the longest streak by any country, save for the US.

As for what the experience had been like, Jones said this was probably the calmest he’d been during any golf tournament. That he’d been able to win a tournament on a golf course such as the infamous home to the Honda Classic, only served to add even more value to the victory, said the Aussie.

Argentinian US Open and Masters winner Angel Cabrera has reportedly been arrested by police and is about to be extradited back to the country of his birth in order to ….