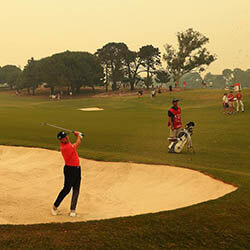 Australian golf on Friday suffered a tremendous and unprecedented blow to the sport resulting from the cancellation of the country’s three largest premium golfing tournaments.

All three major tournaments scheduled for February next year have been officially called off. They are the PGA Championship and the men’s and women’s Australia Open. The men’s Open has been competed without interruption since 1945, during which year it was cancelled because of World War 2. It first debuted in 1904.

PGA Australia CEO Gavin Kirkman has described the cancellations to be “a real blow” for the sport as well as for local fans. Kirkman said the unprecedented decision followed months of “exhaustive” consultations and an ongoing weighing up of all possible options. Options considered include players entering a similar hub to that followed by many other top-league sports, strict bio-bubbled isolation periods, and even restrictions imposed on movement and the number of fans permitted to attend the events.

The initial plan was for both the Australian Open and the PGA Championship to be played in a late-November / early-December timeslot. The tournaments were scheduled to be competed at Kingston Heath in Melbourne and at the Royal Queensland in Brisbane. Both were however recently pushed out in the hope of a late southern summer timeslot becoming available near the Women’s Open. Ongoing fears over the overall safety of spectators, players, and event organisers, have however forced the decision regarding the outright cancellation.

The only remaining thing to be done at this point in time is to look forward to all three tournaments returning to Australia in 2021-22, said Kirkman.

Aussie golfer Matt Jones on Sunday walked away not only with a phenomenal $1.63 million in winner’s prize money after a five-shot victory in the PGA’s Honda Classic in Florida, ….