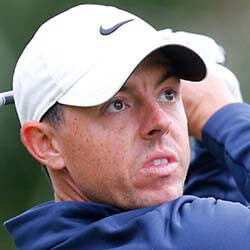 Struggling pro-golfer Rory Mcllroy isn’t exactly living it up on the green. Mcllroy on Wednesday suffered his worse loss in 10 years at the WGC Matchplay when he was forced to leave the course early by a phenomenal performance on the part of Englishman Ian Poulter at Austin Country Club, Texas.

The outcome was a 6&5 victory for Poulter, i.e. Mcllroy’s worst defeat in this particular World Golf Championship since he got creamed 8&7 by Ben Crane in 2011 at Dove Mountain, Arizona.

The Englishman not once forfeited the lead after his 6-foot birdie put on the opening hole. Mcllroy, on the other hand, managed to find a swimming pool with his tee shot at the fifth hole, before recovering ever so slightly by winning two of the next three holes. This was  however as good as it was going to get for Mcllroy, who could do little more than look on as Poulter won every hole between the ninth and thirteenth.

Mcllroy, not unusual for this particular format, declined to hold a news conference leading up to the tournament. He has also not yet commented publicly on his decision to sign prominent English swing coach Pete Cowen, or how the role he’s about to play will affect Mcllroy’s professional relationship with long-time coach and mentor Michael Bannon.

What’s for absolute certain is that this will not have been the sort of performance the pro-golfer would have been hoping for during the final approach to the Masters.