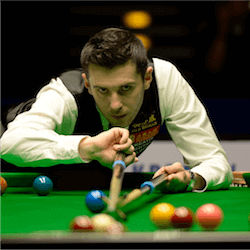 All eyes may be on Snooker Masters favourite Ronnie O’Sullivan ahead of the 2018 Snooker Masters, but those in the know have said that the man to be watching closely is Mark Selby.  Selby will be O’Sullivan’s main concern at this year’s Snooker Masters.  We take a look at what Selby has been up to over the last couple of years.

Selby first secured his name in the world of Snooker when he beat Ronnie O’Sullivan at the Crucible and became the new Snooker World Champion.  He walked away $300,000.00 in hand, the sport’s biggest pay cheque.

Selby went on to win three major events during the 2014/2015 period.  2014 kicked off with a bang when he won the Riga Open.  This must have come as a decided relief after having been beaten by Mark Allen, 4-3.  Later in that same season, Selby went on to win six matches, reaching the final round of the German Masters in that year.  He ended up defeating Shaun Murphy in a riveting 9-7 competition contest.

2016 turned out to be a brilliant year for Selby.  During that year he became only the sixth player ever to win the Crucible more than once.  Selby shone in the final, leading the entire session against Ding Junhui and ultimately securing a 18-14 victory.

During that same year, Selby went on to claim a second United Kingdom championship title when he once again stuck it to Ronnie O’Sullivan by seeing him off 10-7.  By this time, Selby had become only the sixth player in the history of Snooker to have won all three Triple Crown Events on more than one occasion.

If 2016 was an awesome year for Selby, then 2017 would be going on the fantastic.  In 2017 Selby became the first player ever to win the World Championship and the China Open in the same year.  After securing his third championship glory, Selby joined the elite club in 2017.  The 18-15 victory that he secured in the final whilst playing John Higgins meant that Selby had now become only the fourth player ever to have successfully defended the Crucible title crown.