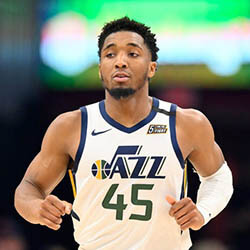 Donovan Mitchell, shooting guard for the Utah Jazz NBA team, has contracted COVID-19. This news comes in the wake of his teammate Rudy Gobert contracting coronavirus.

Gobert was the first player to test positive and behaved carelessly in the locker room, touching his fellow players and their belongings even though he had been warned about how serious the situation is. This cavalier attitude didn’t end with his teammates, either, and the player was spotted purposely touching audio recorders and microphones on the podium during a recent media session.

Gobert has gone on to apologise for his actions, saying that he’s sincerely sorry for how he behaved. He explained that he had no idea that he was infected and vows to learn from his behaviour and do better going forward.

Mitchell has taken to Instagram to thank everyone for reaching out to him since the news broke.

He stated that everyone is still learning about how to behave appropriately and expressed a wish that he hopes people will continue to educate themselves, since they’re not just looking out for themselves but after the health of those around them, too.

The League recently announced that the current NBA season will be suspended after the Utah Jazz and Oklahoma City Thunder game got postponed when Gobert tested positive. This was the first of two games that got cancelled, the other one being between the New Orleans Pelicans and the Sacramento Kings. The League has told all teams that have played in Utah in the last 20 days to self-quarantine.

Greg Smith has seen his doping ban lifted and may return to coaching Athletics thanks to a legal loophole. Smith, who until recently was in charge of training Bendere Oboya, ….

The Australian Sports Museum Set to Reopen in February

The newly-named Australian Sports Museum, home to the biggest collection of sporting memorabilia in the country, will be reopening soon, after it’s AU$17 million upgrade. If you want to be ….

Sportsmen Step up in the Wake of the AU Bushfires

Cricketers from Australia and New Zealand are wearing black armbands as a tribute to those who have been affected by the devastating bushfires in Australia. At least 18 people have ….