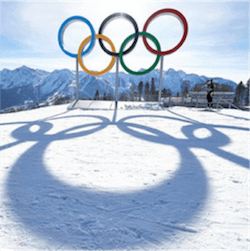 It’s a widely discussed truth: Winter Olympians tend to be as stark white as their surroundings. Of the 66 starters in the women’s giant slalom, for instance, only one athlete was black. Kenya’s Sabrina Simader recalls how at the beginning of her career, people literally stared without shame. Skiers were just simply not usually black.

It may very well be nothing more than a coincidence; a Scandinavian coincidence to be precise. The Winter Olympics have held fast to its Scandinavian heritage and lineage, quite understandably so, with the real performers usually coming from Alpine countries or the Rocky Mountain regions in the United States.

Playing The Racism Card Borders On The Extreme

Still, to say that the Winter Olympics are in essence racist, would be generalising in the worst possible way. The figures do make for a disconcerting bigger picture, with 39 of the African Continent’s nations not having delegated a single representative to the games. What really drives the weight of the statistic home is that some of these nations are situated in countries with ski resorts.

Consider the country of Lesotho, for instance. Lesotho has a resort at Afriski but the country has never delegated any athlete to compete at the Winter Olympics. Even forward-looking South Africa has this year for the very first time entered its very first Alpine skier.

Ultimately, it’s more about inclusion than anything else. Jazmine Fenlator-Victorian, a member of the Jamaican bobsleigh team hit the nail on the end when she said that little boys and girls needed to look up to someone who looked like them, talked like them and had the same culture and values as what they do. Considering this, it’s clear that the typical image of the Winter Olympian needs to undergo some serious adjustments.

For many years the Winter Olympics’ survival has depended largely on sponsorships from broadcasting giants like NBC. If the event is to remain relevant on a global scale, it will have to undergo some changes at operational level. Racial background forms more than just an underlying idea here. And yet, organisers would want everyone to believe that there is in fact, no problem. Then again, perhaps the games are moving in a better direction. Six nations not “typically white” have entered the games for the first time this year, including Eritrea and Kosovo.

The times certainly are a ‘changing, and for the better too.