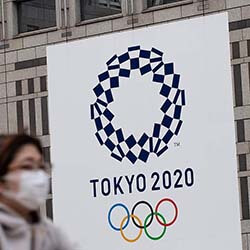 With the Tokyo Olympic Games drawing ever nearer, Japan now has precious little time left remaining to make a final call on whether the event will actually be in a position to take place as planned this year.

There are no fewer than 90 days left to go, and with the capital officially in a state of emergency, and a dark and morbid milestone of 10,000 deaths now exceeded, and less than 1% of Japan’s population vaccinated, the situation is wearing precariously thin.

Japanese Prime Minister Yoshihide Suge as recently as a month ago once again renewed government’s pledge to put on the games this year as a show of humanity’s tenacity and victory over the crisis – which has led to organisers remaining confident that the event will indeed proceed on July 23.

The reality, however, is that a devastating fourth wave of infections is making the necessary preparations even more challenging than what they were a month ago when Suge gave his re-assurance. Athletes too, have voiced increased anxiety over not only whether or not the games will actually be played this year, but also regarding their own personal safety.

Extremely disappointing for Australian athletes has been the fact that they’ve not been able to travel to the host country ahead of this weekend’s diving qualifying events. The country has declared the situation in Japan simply too dangerous to justify the risk. Australian Olympic diving hopefuls recently took to social media slamming the Olympic administrative body for diving, FINA, for pushing ahead with the qualification rounds regardless.

Diving Australia has in the meantime said that they remain hopeful that the games will indeed take place as planned this year.

A former US Olympics gym coach recently charged with no fewer than two dozen sexual assault and human trafficking crimes, has killed himself. John Geddert, who was accused of recruiting ….