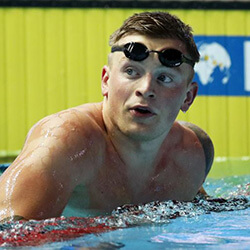 British Adam Peaty claimed his seventh World Championship gold medal after he successfully defended the men’s 50m breaststroke title that took place in South Korea. 24-year-old Peaty, who won the event both in 2015 and 2017, claimed first place with a time of 26.06 seconds.

Britain also took bronze home for the mixed 4×100m medley relay, which Australia won and the United States earned second place. The British quartet was made up of Georgia Davies, Peaty, Freya Anderson, and James Guy. Talking about the bronze, Davies told reporters that it was his fourth World Championships and his first medal, and that he was over the moon with happiness.

Guy added his own thoughts, stating that it as a great race and they did out job, and that there will be more from them in the future as they challenge for Olympic gold. The latest relay result means that Peaty has won three medals in Gwangju, which includes two hold medals. This marks him as having won both the 50m and 100m breaststroke titles for the past three World Championships, including 2019, 2017, and 2015.

After he had started off well in the 50m event, he pushed clear of his main rivals, and finished six tenths of a second clear of Felipe Lima, and Brazilian Joao Gomes Junior, who crossed the line in third. Peaty told reporters after the race that his result was just shy of a world record but that he’s still got ten years left.