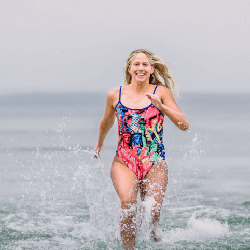 It’s official: Australian swimmer Chloë McCardel is the undisputed queen of the Channel. McCardel on Wednesday swam the stretch of water between France and England a record 44 times, thereby surpassing the previous record of 43 trips held by Britain’s Alison Streeter.

Completing the mammoth task had been everything but easy, said the champion long distance swimmer this week. So much so, that it’s taken McCardel 12 years and over 450 hours in the hypothermia-inducing water to achieve.

The marathoner thanked all those who had helped her achieve her goal along the way while celebrating her big win wrapped in the Australian flag. She said she hopes to now be able to inspire a next generation of marathon swimmers in the same way she had drawn inspiration from those who had gone before her.

She hopes to inspire especially women with her determination, tenacity and endurance. Herself a survivor of domestic abuse, she now credits swimming with helping her during the recovery process.

Still – it isn’t as if the thought of crossing the Channel enough times to set up a new world record always came easy to her, the Aussie admitted. At times it seemed rather crazy, especially given the insane rules associated with a qualifying crossing. Swimmers aren’t permitted to wear any form of thermal clothing – not even a cap.

After learning to swim at the age of 11, she would soon after go on to start swimming competitively. She took up marathon swimming for the first time as a young and inexperienced 19-year-oild.