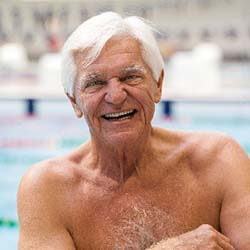 Australian John Konrads, who in 1960 won an Olympic gold medal, and who throughout the course of his illustrious career set an incredible 26 individual freestyle swimming world records, has died. He was 78.

Born in Latvia in 1942, Konrads moved to Australia with his family in 1949. The Sport Australia Hall of Fame announced his passing on Monday.

Konrads had been a swimming sensation in the 1950s and 1960s, and had dominated the world swimming scene by breaking every conceivable record between the 200m and 1500 freestyle swimming events by the time he was 15. Sport Australia Hall of Fame chairman John Bertrand this week said in a statement that Konrads’ freestyle world record run had been nothing short of incredible.

By the time Konrads had reached the age of only 14, he was named reserve for the Australian Olympic swimming team that competed at the 1956 Melbourne Games. And only four years later, Konrads would go on to win two bronze medals as well as the 1500m freestyle gold at the 1960 Olympic Games in Rome.

Aus Olympic Committee president John Coates this week said the “Konrad kids”, i.e. John and his sister Ilsa, had been a story of opportunity meeting raw talent and sheer and unwavering determination to succeed. To John’s father, prompting his son to swim had been born from the idea that the sport would help him (John) recover from childhood polio. But after the pair had been spotted and trained by legendary swimming coach Don Talbot, they overcame not only personal difficulties, but would go on to absolutely blossom into the sporting greats they themselves would ultimately go on to become.

Chad le Clos threw his hands up in victory after beating American favourite Caeleb Dressel to win the 100m butterfly at the World Swimming Short Course Championships. As one of ….