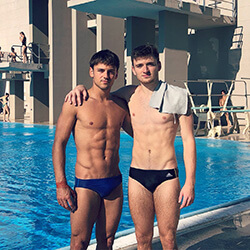 British drivers Matty Lee and Tom Daley claimed their first major titles as a pair after they won bronze for the 10m-synchro event that took place at the World Championships in South Korea.

Chinese Olympic champions Yan Ca and Aisen Chen managed to total 486.93 from their six dives to take the gold for the event, while Russian Vikltor Minibaev and Aleksandr Bonbar finished with a total of 444.60. The British duo had dropped from second place to third after Lee made an error for the fifth round, but managed to hold on to third place from the Ukrainian team to secure a total of 425.91, and to take the final podium place thanks to an impressive dive at the end of the competition.

The bronze medal is the second for Great Britain for the event following a 3m-synchro silver that was earned by Dan Goodfellow and Jack Laugher. It’s the sixth World Championship medal that Daley has claimed for his career, and comes 10 years after he won individual gold during his debut in Rome in 2009. It has also put him in line for a chance at the fourth Olympic Games after he competed at the 2008 Beijing, 2012 London, and 2016 Rio events.

Talking about his latest medal, Daley said that despite all the problems he has been having, he is happy to be back into diving and that having his son played a massive part in returning to the sport.