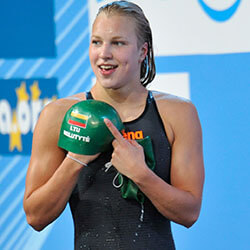 London Olympic swimming winner Ruta Meilutyte has announced that she will be retiring from the sport indefinitely after it was discovered that she had missed three drug tests. The Lithuanian swimmer trainer and studied in Plymouth, and during this time she won the 100m breaststroke gold in 2012 when she was 15.

At 22 years old now, the former European and world champion was facing a potential ban of 1 to 2 years after she claimed responsibility for having missed the tests. Anti-drug officials were not able to make contact with the swimmer on three separate occasions over the last year. Meilutyte has admitted that she struggles wit mental health issues, and that it was made worse after she came in seventh place in the 100m breaststroke during the Rio 2016 Olympics, suffering a broken elbow before the event took place.

Since then, Meilutyte has left the UK and trained around the world, including her home country, Australia, the USA, and Turkey, and is now set to return to her education and intends to pursue a career outside of swimming. Talking about her retirement, Meilutyte stated that she experienced a life she never through possible thanks to swimming, and she had the chance to see a large part of the world and to get to know many people around the world. She added that she wants to experience simple things, and to better understand herself and the world around her going forward.