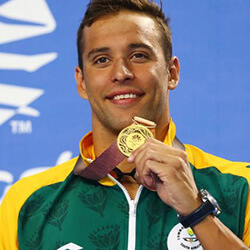 As one of the most eagerly anticipated match-ups at the end taking place in the Chinese city of Hangzhou, the South African swimmer managed to earn the gold thanks to a time of 48.50 seconds, which was 0.21 seconds ahead of main rival Dressel.

It was the fourth 100m butterfly world title for Le Clos, and a much welcomed change for the disappointment that he experienced some days earlier. On the first day of the event, the 26-year-old fell under his own world-record time in the 200m butterfly despite coming second to Japanese Daiya Seto.

Lisa Bratton stunned many when she took gold in the American one-two for the women’s 200m backstroke as the United States stepped forward to assert their dominance in the 25m pool. Bratton beat Olympic gold medallist Kathleen Baker, pushing 0.08 seconds in front of her that was one of the most thrilling victories yet at the Chinese event. Australian Emily Seebohm finished the race with bronze.

Hungarian Katinka Hosszu, who had previously won three gold medals at the Rio 2016 Olympics, is a record-holder at the short course events, was pushed into fourth and out of the chance to earn any medals. Bratton’s triumph in 2:00.71 increased the United State’s medal count up to a total of eight so far.